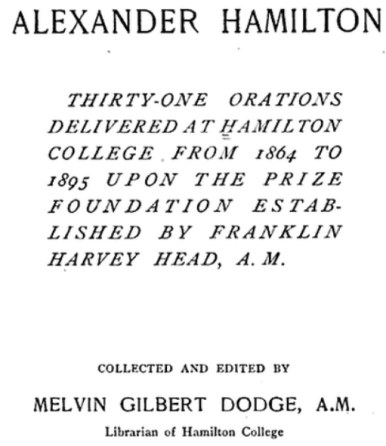 I came across an interesting collection that I wanted to share.  Franklin Harvey Head, who penned an extremely influential address on the meaning and goals of liberal arts education in the US, sponsored a prize foundation at Hamilton College that awarded the top student orator for each year a prize for preparing and delivering a speech on Alexander Hamilton.  The introduction to the collection states “Mr. Head established the prize called by his name, designating that the subject for this Prize Oration year by year should have reference to the character and career of Alexander Hamilton.”  The introduction also notes:

“No name from the rolls of our struggle for independence and our binding together as a nation awakens more intense interest or opens wider fields for consideration than that of Hamilton.  From the first appearance of the youthful student, to the tragic hour on the heights of Weehawken, the story has the attraction of romance, and in it can be found the kindling of influences potent not only for then but for all time.”

The thirty-one topics include:

The collection of thirty-one prize-winning student oration is interesting for several reasons.  First, it offers us a snapshot of what students in the 1864-1895 time period were focused on studying.  Second, the range of topics varies from purely historical discussions of particular aspects of Hamilton’s legacy, to discussions of Hamilton in comparison to contemporary political figures.  I found the essays comparing Hamilton with contemporary politicians (Disraeli, Thiers, etc) extremely interesting.  Those orations offered an insight both into Hamilton and into the political theory of the late 1860s.  Keep in mind that these orations were being delivered for the three decades immediately after the Civil War, when the nation was still reeling.  Little wonder that students would seek lessons from the Constitutional period for guidance during another time of division and crisis.

The full text of the thirty-one orations is available via Google Books and Cornell’s Internet Archive..