The statue of Hamilton at Columbia University stands proudly outside of Hamilton Hall and greets students and campus visitors.  The Hamilton statue was commissioned by the Alumni Society and erected in May 1908, as part of the commencement celebrations of that year and was presented by the Alumni Society to the school.  The Columbia University Quarterly from 1908 describes in detail the poetry verses and procession that were part of the celebrations surrounding the unveiling of the statue.

“No memorial of affection for their alma mater from her children could be more appropriate than this noble statue representing, and fashioned by, one of themselves; this embodiment of civic virtue and the highest public service; this splendid monument of immortal youth great in thought and action, of the loftiest ambition without a trace of meanness, of transcendent political genius and intrepid constancy, of constructive statesmanship which was a great, if not the greatest single force that gave vitality, direction, and lasting quality to this Union of States, of oratory that had the rarest attribute of human speech in convincing the judgment of men against their will and in compelling their will to follow the dictates of their captivated judgment.  May this statue stand here for all time, a tribute of affectionate gratitude to the College from the Alumni, an ever-present incentive to successive generations of students.”

Sculptor William Ordway Partridge described the sculpture in his catalogue:

“This heroic statue of bronze stands on the plaza in front of Hamilton Hall, Columbia University, and represents the great statesman at the moment when he is making the historic speech at Poughkeepsie which won over his opponents and saved New York to the Union.  Presented to the University on behalf of the alumni by President Butler.  The speech of acceptance was made by George L. Rives.  Dedicated and unveiled May 27, 1908.  The pedestal was designed by McKim, Mead and White.”

Here’s the statue looking as handsome as ever on one of my visits to the Columbia campus.  (My brother Sid is a recent graduate of Columbia, so I’ve had the opportunity to visit the campus quite a few times!) 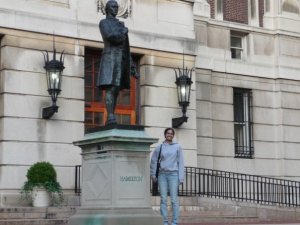