If you’ve visited Central Park, you may have come across a very handsome statue of Alexander Hamilton.  The statue is located between 82nd and 83rd streets on the East Side of the park.  The statue was donated by Hamilton’s son, John C. Hamilton to the park in 1880.  The Hamilton statue was sculpted by Carl H. Conrads, an American sculptor best known for his work commemorating the Civil War.  Conrads served in the Union Army during the Civil War and designed statues that you can find in West Point and San Francisco. 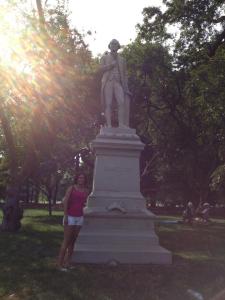 The 1880 statue actually replaces an earlier Hamilton statue that was destroyed in the Great Fire of 1835 and had stood on the floor of the original New York Stock Exchange building.  According to Inside the Apple: A Streetwise History of New York City:

“A valiant attempt was made to rescue a 15-foot statue of Alexander Hamilton from the floor of the exchange, but just as the statute reached the doorway, the roof collapsed, destroying it.  The statue, by Robert Ball Hughes, was the first marble statue created in the United States and had been installed only eight months earlier.  Though it took 45 years, the statue was ultimately replaced by Hamilton’s youngest son, John C. Hamilton, and it stands in Central Park behind the Metropolitan Museum of Art.  This statue in the park is remarkable in that it is made entirely of granite– not the easiest stone to carve–and it has long been thought that John C. Hamilton commissioned the work out of this durable stone so that no matter what calamities might befall Central Park his father’s statute would endure.”

The original statue is pictured here, in an image from the New York Public Library.

On November 22, 1880 Chauncey Mitchell Depew made a public address to commemorate the unveiling of the statue at Central Park.  Some excerpts are below:

“Precocious intellects in all ages of the world have flashed with meteoric splendor; and for a brief space amazed mankind; but he only whose full equipped mind knew no youth and never failed in the full maturity of its powers was Alexander Hamilton. ”

“…Hamilton, at eighteen, was hailed by the whole country as the peer of the Adamses and of Jay.  But when the multitude, smarting under wrongs and fired by the eloquence of their champion, sought riotous vengeance upon their enemies, he stayed the angry mob while the President of his College escaped, and offered to lead in defence of property and the majesty of the law.  Popular passion never swayed his judgment; personal ambition, or the applause of the hour, never moved or deterred him.”

“Hamilton forged the links and welded the chain which binds the Union.  He saw the dangers of Secession, and pointed out the remedy against it in the implied powers of the Constitution.”

“Upon the boundless sea of experiment without chart of compass, he invented both.  He smote the sources of revenue with such skill and power, that from the barren rocks flowed the streams which filled the Treasury and the Sinking Fund, and the exhausted land was fertilized by its own productiveness.  Out of chaos he developed perfected schemes which have stood every strain and met every emergency in our national life.”

For the full text of Depew’s remarks, see here.

2 thoughts on “Images of Hamilton: Hamilton Statue in Central Park”